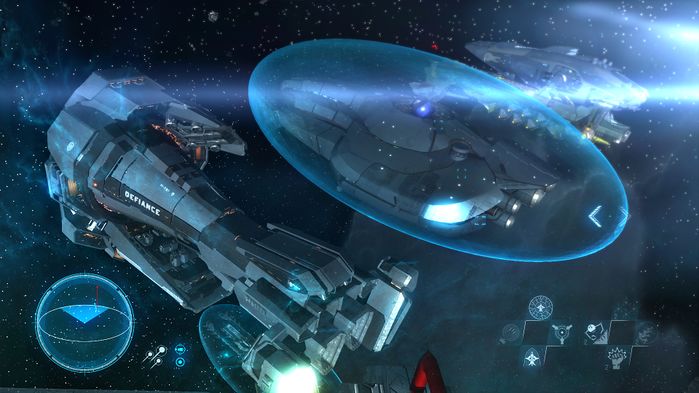 Added by the Titans Return DLC, the Titans are the largest ships in the entire game, even larger than the titans of SG2, these behemoths can utterly ravage entire factions' fleets by themselves.

The original Titan was the 'Leviathan', an Imperial mobile battlestation deployed by the remnants of the Imperial fleet as a last resort to retake Gemini, which failed. The Leviathan was destroyed at a heavy cost, but the factions of Gemini replicated the technology 12 years later. These first generation of Titans eventually became extremely common, but had an immense power at the time. Eventually, they were rebranded as the current versions of Battleships, Dreadnoughts and Carriers. These Titans are the second generation, four times bigger than even dreadnoughts, and much more powerful.

The Solari Concord's planet-wrecking superweapon, the Proxima, was also based in the Leviathan's technology, and could be considered a precursor to the current Titans, however, it has no engines of any kind, and is technically not a ship.

The A'Shriari's new Mothership also has Titan-like size and capabilities. However, it is far bigger, and acts more like a mobile Starpoint/Shipyard/Planet-buster Weapon than a ship.

Titans are able to emit an aura that strengthens allied ships around them. The Prosperity can be used without the DLC. The Titans can also be displayed as trophies at Concordia Station if you have them in your garage. All the DLC Titans can be obtained for free by playing and completing the Titans Return quest.

Only the basic stats are presented here. For full information, check out the specific page about each ship.