Starpoint Gemini Warlords possesses a large variety of flyable ships, from the tiny and puny Gunship to the massive and overwhelming Titan. There's currently over a hundred different flyable ships, from all kinds of factions. Unlike Starpoint Gemini 2, there's a lot of difference in the ship sizes. For example, a Battleship will be dwarfed by a dreadnought or a carrier, even more so by a titan.

Currently, more than 100 ships are organized over 1 AI class and 11 playable classes:

This section covers the basic aspects used to upgrade and customize your ship - primary components, weapons, equipment and enhancements. Check out the separate article which holds additional information about every item, weapon and upgrade in the game. You can only upgrade your ship on stations and planets. Use the Drydock panel to make the wanted changes. Primary systems (Power core, Shield generator, Propulsion…) can only be enhanced, not changed for a completely different system. Light weapons, heavy weapons and fighter crafts are a different matter. You can both switch them for a different weapon/craft and enhance them with the various enhancements on offer. Use Beams to melt down the shields and Rail Guns or Rocket Launchers to grind down the hull. You can already use more than 150 different weapon systems, ranging from light weapons such as rail guns, lasers to powerful rocket launchers that can easily force their way through the enemy's hull. On top of that, each system can be upgraded even further to increase their rate of fire, recharge rate, damage, range and so on. With the advanced skills and perks system (which is still being developed), the level of your ship's customization becomes infinite.

Remember that you can't obtain all ships from your starting HQ, nor that you can buy every single ship. Gemini system is filled with powerful factions, with some of them focused on the ship manufacturing. Naturally, these factions will sell unique ships, for the right price. Explore the map to find these factions and their shipyards.

You will be able to equip more than 150 different weapon systems, organized in two main groups - Light and Heavy weapons. Light weapons have infinite ammo, but need energy to fire. Energy is a resource that regenerates quickly over time and can be affected by several modifiers - skills, equipment and so on. Heavy weapons need ammo, so be aware of that fact during the longer battles. Some of them might last for 20 or even 30 minutes, so make sure you are smart about spending your expensive ammo. Over 100 types of Light weapons are categorized as Rail Guns, Lasers (beams) and Plasma. Heavy weapons are, well - heavy weapons. Each type has its own advantages and disadvantages. More info can be found in the main article about ship customization.

Most of the primary components can not be replaced. All ships need Power Cores, Sensors, Shields Generators and so on. However, you will be able to upgrade those components with enhancements which will affect their balance and increase their regeneration rate, range, area of coverage and so on. More info can be found in the main article about ship customization.

Equipment can be purchased on stations and planets or salvaged. Every equipment has a limited number of charges. When all charges are spent, the equipment disappears from inventory. Equipment is not calculated into the Cargo hold capacity, but has a separate inventory (also limited). Equipment can be placed into the equipment quick bar for faster use. More info can be found in the main article about ship customization.

Enhancements are special add-ons installed directly into system slots and they are linked to the slot. Replacing a weapon on a weapon battery does not remove or replace any existing Enhancements on the battery. Every system slot can sustain only one Enhancement, but the installed Enhancement can be replaced at any time. A special attribute of Enhancements is “Manufacturer”. This shows what faction produced/created/thought of it. This is important since some Enhancements are only available when player is in good standing with a faction. More info can be found in the main article about ship customization.

Use the Shipyard panel on stations and planets to buy new ships. You can control only ONE ship at any given time, so when buying new ships, you’re actually exchanging your existing ship with a new one. A portion of the value of your current ship is calculated in the transaction.

You can also purchase a ship directly into your garage, if you have an empty garage slot. This will deduct the entire price from your Credit account and store the new ship directly in your Garage, while you remain in command of your current ship.

When you reach a high enough Rank, you will be able to hire additional mercenaries to travel with you as your fleet. You cannot influence how those ships will be outfitted. Their captains take care of them themselves.

Player has the ability to command a fleet of up to 2 additional ships. These ships can be hired on stations and planets and must be paid salaries on a monthly basis. Ships and crews in the player’s fleet follow player’s experience level and improve with the player (both in ship upgrades and skills).

Player is not able to hire additional crews from the very beginning. That ability is gained with higher ranks. Also, player can only hire a ship if that ship’s captain is of lower rank than the player. Example: If player is of rank Commodore, he can only hire captains of rank Captain or lower.

A hired captain’s skill improvement is limited by his Rank, which unlike experience levels and overall ship status, does not level-up with the player. Hired captain’s Rank is also an important factor in his pricing. 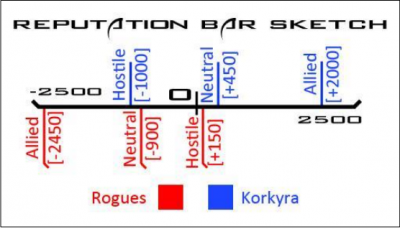 It is important for the player to watch his Reputation with the Gemini factions. Their behavior towards him depends on it. Better reputation with a faction can unlock special options and bonuses.

Reputation is represented by a single progress bar, spanning from -2500 to +2500 points, with the player normally starting on an even 0.

Behavior of every individual faction depends on that reputation bar and specific points on it. The following example will show behavior dependency on Reputation for Korkyra and Rogues.

As can be seen from the above example, there is no possible way to be in good standing with all factions. There are variations, but the basic idea is the player chooses to be either lawful or outlaw.

More parameters are taken into account, but this sketch is the simplified version suited to explain the basic principles.