The Titans Return DLC was announced on 2017-07-21[1], and released on 2017-08-10[2] alongside a small, un-numbered game patch. The expansion focuses on the new Titan-class ships available within the DLC and the newly-created storyline & Free-roam scenario surrounding them. 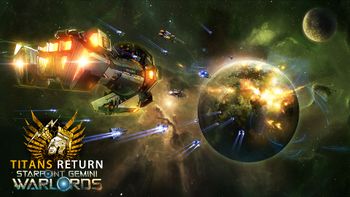 The release of Titans Return coincided with a small, un-numbered game patch for the base game which includes some optimizations and bug fixes, as well as a Titan-class vessel to owners of the base game: